It’s 5:30am and I’ve just hit the snooze. I pull the covers up and prepare for my next nine minutes of sleep. I should get up. Yesterday I made a promise to myself to be at the gym by 6am. ‘So what’ the traitor voice in my brain says to me, ‘you’ve made that promise dozens of times and haven’t kept it – one more time won’t make any difference. You can do it tomorrow. Besides you have a big day today and the bed is warm and you could use the extra sleep…’ 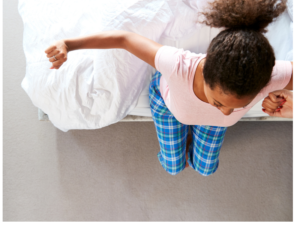 Sound familiar? This was how I operated for YEARS. Not just about getting up in the morning but about any new habit I was trying to form. Or bad habit I was trying to break. I’m going to eat healthy starting on Monday! I’m going to drink more water tomorrow! I’m going to stop scrolling social media tonight! I made promise after promise after promise to myself and broke every single one. I set goals and didn’t meet them. There were no consequences other than my own guilt so it made it easier to do again.

I hadn’t always been like that. As an undergrad and graduate student I was diligent, responsible, always on to the next hoop to jump through; the next accomplishment; the next accolade. But as we get older there aren’t as many accolades to be had – certainly not for someone who left the professional world for a time to stay home with kids – talk about a thankless job with no recognition. There were no more “As” to get on tests, or theses to write and defend, or diplomas to earn. There were no more opportunities to earn praise from the outside, and because I had never cultivated inner drive or self-confidence, my self-esteem plummeted.

Enter the broken promises and the snooze button. And me lying in bed talking myself out of getting up. Unfortunately for the traitor voice I’ve learned a few things in my journey back to self-esteem and confidence. I’ve learned that every time you keep a promise to yourself you are teaching yourself that you are a person that can be trusted. I’ve learned that keeping these little promises, even if they suck in the moment, make you feel fantastic about yourself in the long run. And I’ve learned the most powerful mantra for keeping these promises: Don’t think, just move.

After years of taking poor care of myself I’ve become a person who goes to the gym in the morning, eats well and drinks plenty of water. I thought that becoming this person would mean the traitor voice would go away. It hasn’t. I’ve just gotten better at resisting it. I don’t want to go to the gym. I don’t feel like working out. I would not describe myself as motivated. But as soon as the traitor voice starts, I say out loud ‘don’t think, just move.’ And then I move. Traitor voice is silenced. As I’m brushing my teeth traitor voice tries again with these thoughts: ‘you could work out later today, just get back in bed now. Or wouldn’t it be nice to just sit with a cup of coffee?’

Again I say ‘don’t think just move.’ It is simple, but it is powerful and it works in lots of situations. For an in-depth look at exactly how this kind of mantra can change your life I recommend Mel Robbins The Five Second Rule. She developed saying ‘5, 4, 3, 2, 1’ to get herself out of bed. I still use ‘don’t think, just move,’ but they both do the same thing. They stop the part of our mind that is trying to maintain status quo, and open us up to doing something new. You can use these mantras to speak up in a meeting, or ask for a promotion, or try white water rafting, or like me, start a second-half-of-life career in voice acting:

An audition arrives to voice a character in a kid’s show. ‘Oh I’m not ready, I shouldn’t even try, another opportunity will come along later…’ Don’t think just move!

‘I could never do audiobooks they are so much work and I’m a slow editor, and I should just wait until I feel more ready’ UGH! Don’t think just move.

We will never feel ready for new things or opportunities, even when we actually are ready. And our primordial brain fears new things and will try to talk us out of them. Don’t let it win.

Don’t talk yourself out of doing the right thing, or out of a great opportunity, or reaching a goal, or keeping a promise. You are capable of so much more than you think you are. Don’t think about it – just move!